India met Japan in their for the second time in the four-nation invitational tournament, the results remained unchanged as India once again beats Japan by 4-2.

The second leg of the tournament saw an enthralling game between these two teams, and despite having secured its place in the final, Indian men Hockey team played with the same fighting spirit.

The winning streak continued for India with the past wins over New Zealand 3-2 and Belgium 5-4. Having beaten Japan 6-0 in the first leg at Tauranga, India once again registers a successive win and makes it to the top of their table.

India top the pool after three wins in the second leg of the Four Nations Invitational Tournament in New Zealand. Here is how the teams stand on 27th January 2018.#IndiaKaGame pic.twitter.com/kqNuGzweMJ

Indian Men’s Hockey Team remains unbeaten in the second leg of the tournament and lets give you a short summary of how India’s magnificent performance handed Japan a defeat today.

The Manpreet Singh led Indian Hockey squad put up a brilliant performance in today’s encounter as just 12 minutes into the game. India shed first blood via Vivek Prasad fine strike that went straight into the nets.

Just 2 minutes later, Japan equalized with a counter attack. The first quarter ended with a tie and so was the second quarter was about to but just a minute before the end of Q2, India’s Varun Kumar didn’t do any wrong in netting the second goal for the Indian side.

The Blue side further built on their dominating position and enjoyed a lead by a margin of 1 till the second quarter ended. Japan which lost the last game to India by 6 to none, this time wasn’t in the mood for giving up.

They gave a strong comeback to India’s every goal as they did at 37 minutes into the game when Japan made full use of their opportunity and produced an equalizer. Thereafter, both teams struggled to put in the next goal.

Q3 went goalless and just 5 minutes before the game was about to end in Q4. India nets in two more goals to clinch the victory, India’s one of the top scorers and Circle of Sports’s proud partner ‘Mandeep Singh’ strikes a top quality goal 58 minutes into the game. Following him, Ramandeep Singh doubles India’s lead and won a fine game of hockey.

If you want instant updates on Indian Hockey Team’s Matches. Do Follow our Twitter Handle: Circle of Sports (@CircleofSports1)

The subsequent schedule for the Four Nation Tournament is as follows: 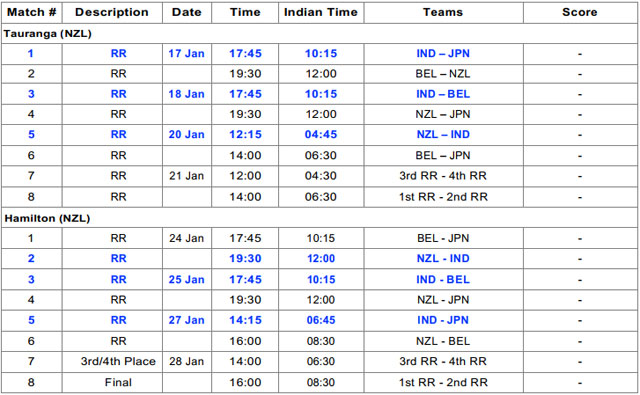